The Boxer – The Class Clown

Often called the clown dog breed, or simply the class clown, the Boxer is a breed that will keep everyone entertained for hours. This is a family dog if ever there is one. He takes his “pack” status as protector and companion extremely seriously. The Boxer makes an excellent family pet because of its intelligence and gentle demeanor with children. 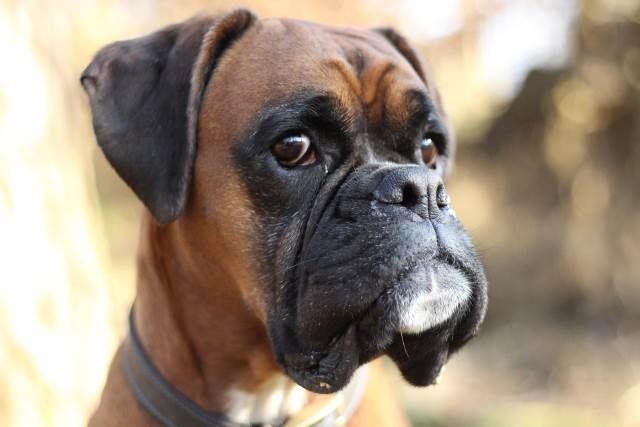 History of the Boxer

The Boxer is a loving, intelligent dog that has a long and interesting history.

This noble, fun breed was developed in the 19th century as an all-purpose working dog, helping hunters track and trap large game, pull carts and round up livestock. Later, because of their gregarious and fun-loving nature, they were used in theater and the circus.

The breed has its roots firmly planted in German soil. It is theorized that the Boxer originated from bulldog breeds and a combination of two German mastiff breeds.

The Boxer comes from a line of Mastiffs developed in Germany, called Bullenbeissers, which became extinct during the late 19th century. The Boxer’s history starts with the breeding together of the Bullenbeissers, and British Bulldogs.

The Bullenbeisser worked as a hunting dog for centuries and was used to pursue bear, wild boar, and deer. Its task was to seize the prey and hold it until the hunters arrived. 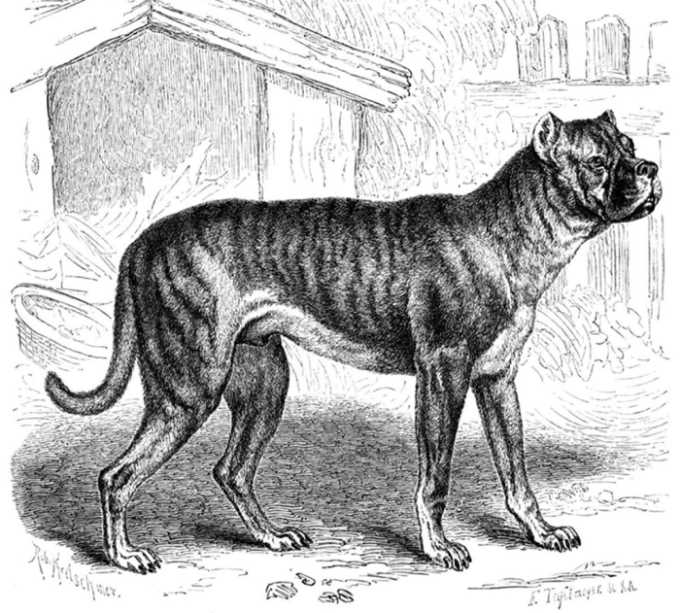 In later years, faster dogs were favored and a smaller Bullenbeisser was bred in Brabant, northern Belgium. This dog became known as the Brabanter Bullenbeisser which is generally accepted as being a direct ancestor to today’s Boxers.

The actual Boxer dog breed was originally bred in Germany as a hunting mastiff.  Like the Bullenbeisser, the Boxer’s was original purpose was to hunt and seize the prey for the hunters.

Today, the Boxer has been domesticated and hunts no more.

The Boxer, often referred to as the class clown, is consistently ranked as one of the most popular breeds to own. Click To Tweet

Where Did The Boxer Get It’s Name?

These adorable and friendly dogs will often try to get your attention by pawing at you with their front paws, while standing on their back legs. It has been said that the origin of the Boxer’s name came from someone who noted this tendency to use their paws when fighting, but this has been disputed by other sources.

According to the book The Complete Boxer by Milo G Denlinger:

It has been claimed that the name “Boxer” was jokingly applied by an English traveler who noted a tendency of the dog to use its paws in fighting. This seems improbable. Any such action would likely result in a badly bitten if not broken leg. On the other hand, a German breeder of 40 years’ experience states positively that the Boxer does not use his feet, except to try to extinguish a small flame such as a burning match. But a Boxer does box with his head. He will hit (not bite) a cat with his muzzle hard enough to knock it out and he will box a ball with his nose. Or perhaps, since the German dictionary translates Boxer as “prize-fighter”, the name was bestowed in appreciation of the fighting qualities of the breed rather than its technique. – wikipedia

The Boxer is a compact and powerful dog. The head is nicely proportionate to the body. The head is distinctive because of the short, blunt muzzle which gives it a “squared-off” look.

Boxers often have distinctive markings including a black mask, white chest markings (known as a “bib”), and dark ears. There are three basic coat colors: fawn (reddish or yellowish brown), brindle (a mix of light and dark stripes) or a solid white coat. Boxers can also have a mahogany coat, or be black with white markings. He comes with a smooth, short coat and extra effort should be taken to protect the Boxer in colder climates. 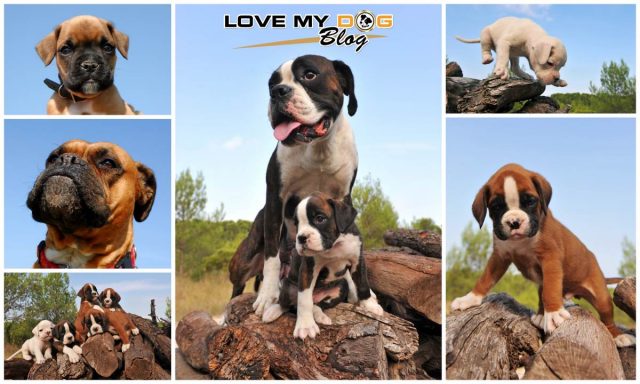 Boxers are one of the most popular breeds in the United States. These dogs make great family pets because they love to be around people.

Boxers are typically a high-energy dog with a jolly good nature. With their high energy level, the Boxer loves nothing more than to go out with the kids and be rough and tumble. He is probably best suited to older children because of this. His natural tendency is to jump up and use his front feet, usually just for a happy greeting, so training should be implemented early to suppress this desire.

He is highly intelligent and learns quickly and easily, but he does have a bit of a stubborn streak, though it is all in good fun.

The Boxer is a faithful and affectionate dog who adores his family. A socially well-developed Boxer gets along with anyone, including other dogs in the family. He also readily accepts cats into his social circle, if he is taught well. Other animals, such as livestock, might be viewed as prey and a large temptation to a Boxer. Make sure they are not left unsupervised with these animals.

Boxers make excellent guard dogs, though familiar people are welcome to them. They are often used in police units and military work due to their protective instincts. The Boxer was one of the first breeds selected in Germany for police training. 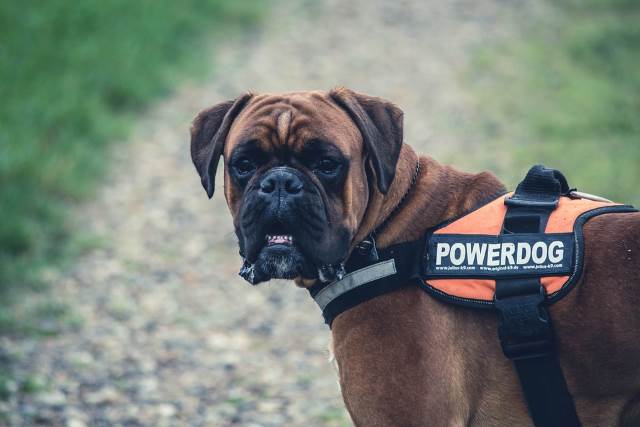 Boxers do much better in households that have a dominant personality within them. The Boxer is truly happy to take a back seat to the rest of the family, but, if given the opportunity, he will rise to pack leader early. A meek owner is going to cause problems for both the family and the Boxer.

Unfortunately, Boxers are prone to some health problems that owners need to know about. The following is a list of conditions that Boxers may develop:

Boxers are also prone to having bad breadth, due to their tendency to suffer from dental problems.  Keeping the teeth and mouth clean and in a healthy condition will help prevent the unpleasant odors.

Due to their high energy levels, Boxers need daily exercise, both physically and mentally. Because the Boxer is such an athletic breed, regular exercise is essential to keep him happy and healthy, and help him live a long life.

Once Boxers are grown, they can become excellent jogging or running companions. Be careful, however, not to  overwork young dogs, as this could harm their growing bones. 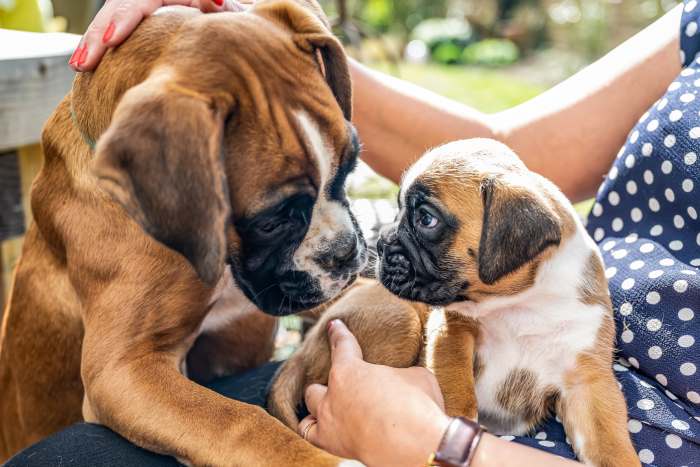 The Boxer is consistently ranked as one of the most popular breeds to own. Of all the breeds of dogs, this one stands out as a champion. The Boxer is not only good with kids, friendly, physically fit and strong, but also has an intelligent mind and a gentle temperament.

Do you have a boxer? Tell us about him or her below! 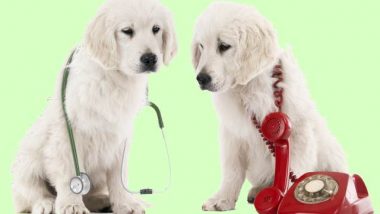 How To Find the Right Veterinarian 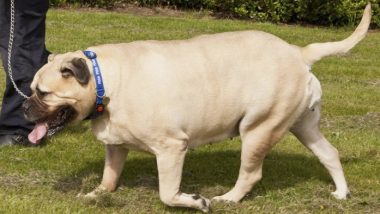 Is Your Dog Too Fat?